More unexpectedly light traffic in France for the ‘great return’, even as an angry mob blocks the major A1 Paris-Lille.

Repairing the A1 carriageway, via @sanef_autoroute

A mob of what was described as ‘angry gypsies’ blocked the A1 between Paris and Lille in both directions last night (Friday).

Trees were felled across access roads and tyres and pallets burned right across the carriageway south of the A29 Amiens-Saint Quentin motorway.

The blockades were lifted late this morning (Saturday) but repairs to the carriageway meant the road only reopened in stages, starting southbound, from mid-afternoon.

Full circulation was finally restored at 20:00 local time since when the road has operated normally.

The protest comes in the wake of a tragic shooting incident at the traveller camp in Roye on Tuesday.

A baby, a policeman and two others were killed.

Demonstrators want the son of one of the victims released from prison to attend the funeral, planned for Monday (31 August).

Drivers had been warned to expect more trouble in the area until then but a court in Amiens granted the protestor’s request this afternoon.

Meanwhile, even the substantial jams around the A1 failed to lift what had been billed as the ‘great return’, beyond the distinctly average.

The last weekend before the schools go back had been expected to see very busy roads but in the event combined queues totalled 470km at midday today, less even than the 550km recorded on Friday afternoon.

With the roads noticeably busy from Thursday onwards, it seems – as on so many other heavily hyped summer Saturdays this year especially – drivers took notice of warnings and changed their travel plans. 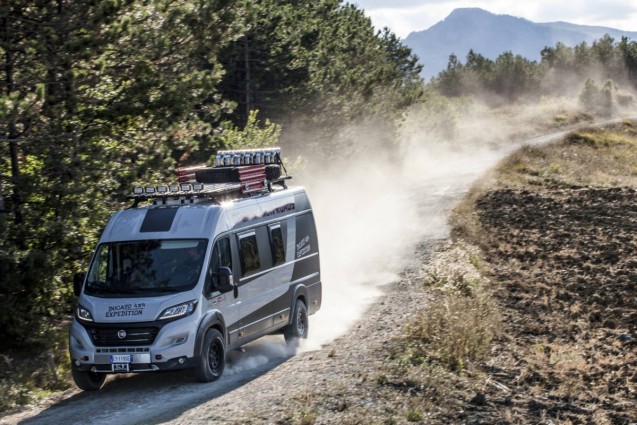 Fiat is showing an off-road concept version of its Ducato motorhome at Caravan Salon, kicking off today in Dusseldorf. Called the Ducato 4×4 Expedition, it is based on the 6.45m model and comes with two bedrooms and four seats and is powered by a 150bhp 2.3 diesel engine with 350Nm of torque. The black gloss and aluminium interior was built by Tecnoform while the mechanical conversion was carried out by Dangel. Such a camper is unlikely ever to go on sale – at least in such outlandish form – but Dangel is already capable of installing the four wheel drive system. Count on six weeks and up to €9000 to do the work.