The Paris mayor is emboldened to press ahead with her ‘most ambitious’ plans to extend car bans in the city, as Brussels gets unanimous backing for its controversial new pedestrian zone and Oslo announces plans to make the very centre free of private transport.

Also, rock fall blocks a major road in southern Norway. The A75 in the South of France has now – partially – reopened in both directions. Drivers in Finland advised to switch to winter tyres early as storage charges reach €100 in Helsinki.

Mayor presses ahead with ‘most ambitious’ plans.

The first long-term consequences of the on-going Volkswagen emissions scandal may be emerging already.

Paris mayor Anne Hidalgo – who previously vowed to rid the French capital of diesel powered vehicles by 2020 – says she will submit the ‘most ambitious’ of recent proposals to permanently ban cars from the banks of the Seine, and extend Car-Free Days in the city.

In an interview with Le Journal Dimanche today, Hidalgo says that after next summer, on the Voie Georges Pompidou on the ‘Right Bank’ of the Seine, ‘Cars will give way to a pedestrian area of 4.5 hectares, on the edge of the water.’

This is in addition to sections of river bank now traditionally given over to the pedestrianised Paris Plage beaches in the summer.

Hidalgo also says she will press ahead with plans for monthly car bans in the city, along the same lines as the first Paris Car-Free Day held at the end of September.

However, next year’s Car-Free Day will be extended to the whole urban area, except for the Peripherique, she says.

OSLO. The reality won’t quite match the ‘first city to ban cars’ headlines, but Oslo council has announced plans to make the very centre of the city private transport-free by 2019 according to AFP Nordic. The council wants to cut car use in the city as a whole by 20% by 2019, and 30% by 2030, in an effort to cut greenhouse gas emissions by 50% by 2020 compared to 1990.

BELGIUM. The controversial new pedestrian zone in central Brussels has received unanimous backing from the city’s ‘Consultative Committee’ says Deredactie.be, though traffic issues were not included in the brief. A large part of the major Anspachlaan thoroughfare across the central Pentagon region, plus surrounding streets, was made off-limits to cars in late June. The period following saw major disruption as vehicles were directed around a new one-way ring surrounding the new fifty acre no-go zone. A €20m scheme to fully embed the new arrangements is now due to go ahead. 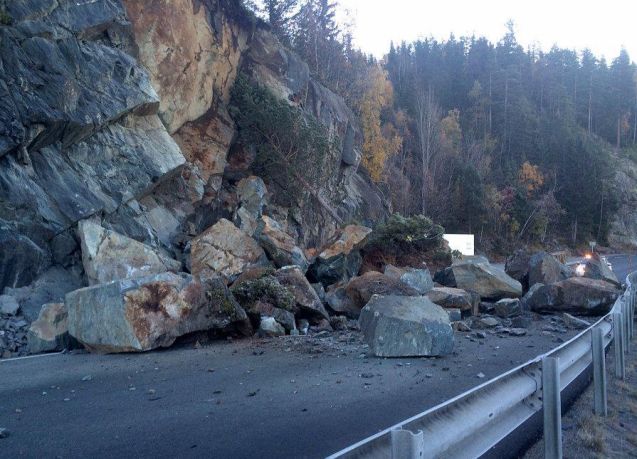 An impressive rockfall – with boulders each weighing up to 20 tonnes – blocks the E134 road between Oslo and Haugesund in southern Norway. Engineers say it may take two weeks to repair the road completely at Vinje though the barriers will be removed to allow vehicles past. In the meantime read about a 2800 mile coastal road trip, from Oslo to Kirkenes on the Russian border, from CNN Traveller. Photo Vegvesen

roundup: FRANCE. One lane of the A75 autoroute southbound finally reopened at Lodeve yesterday reports Trafsud. The stretch between Millau and Beziers in the South of France was partially washed away in a severe storm last month. One lane of the northbound carriageway reopened within a few days. The authorities still advise caution in the affected area. The road is not expected to fully reopen for another three weeks. FINLAND. Winter tyres are not compulsory until 1 December but drivers are already being advised to switch over reports Yle News. The transition from autumn to winter is the most dangerous time say experts as overnight temperatures dip below zero leaving conditions potentially treacherous the next morning. Icy roads around Helsinki last Monday saw seven accidents in two hours. Yle also covers the interesting debate around winter v studded tyres. Finland is the only European country where winter tyres are compulsory in the winter months whatever the conditions though other countries – notably Italy, on the A5 autostrada south of the Mont Blanc Tunnel, from this week – mandate some form of winter preparedness. See more. Meanwhile, Finland Times reports on the scarcity of ‘tyre hotels’ in major cities where storage charges – up to €100 – are more than twice that in other parts of the country.