Lots more police to be drafted into Calais as recent doubling of migrant numbers apparently behind resurgence of disruption at Eurotunnel.

Also, high mountain roads have been closing on and off for the past few weeks but the first permanent winter closure is now confirmed. Less than half of drivers prosecuted for drink driving in Ireland are convicted. As DFDS confirms a new ship Dover-Calais next January, Dover reveals ‘phenomenal’ growth in freight volumes. Cycling surprised by 2016 Tour de France route.

Amid now-daily incursions by migrants at the Eurotunnel terminal, and febrile rumours the army will be sent in regain control of the situation, the French interior minister made a very sober statement this afternoon (Tuesday).

No woman or child will be without shelter in coming months said Bernard Cazeneuve, adding that 710,000 migrants had entered the borderless Schengen Area since the start of the year, and that 291 trafficking rings involving 3000 people had been dismantled.

The state has spent €13m on running the camp in Calais and there are 1300 staff currently maintaining order (see below).

He said the resurgence of migrant activity around Eurotunnel was due to the numbers of migrants having doubled recently, to 6000.

However, Cazeneuve did also say that the area around Calais ‘cannot be a sustainable living space for migrants’.

He will make his seventh visit this year to Calais tomorrow when more announcements are promised.

Yesterday on twitter Calais mayor Natacha Bouchart said she had asked the Interior Minister to ‘study the possibility to involve the army on the site.’

Update 21 October: on the visit to Calais, Cazeneuve announced 300 new Gendarmes to bolster the 225 already on site, and another 160 CRS riot squad officers added to the existing 440, all to be on duty tomorrow (Thursday). Those hoping the camp will be cleared will be disappointed – heated tents are to be provided by the end of this week – but Cazeneuve did repeat that the site is ‘not appropriate for their stay’. He says the state has had some success in offering ‘respite’ to migrants in other parts of the country with 2,000 now having taken up this offer. Those that ‘reject this extended hand’ risk deportation or criminal penalties he said. Update 22 October: 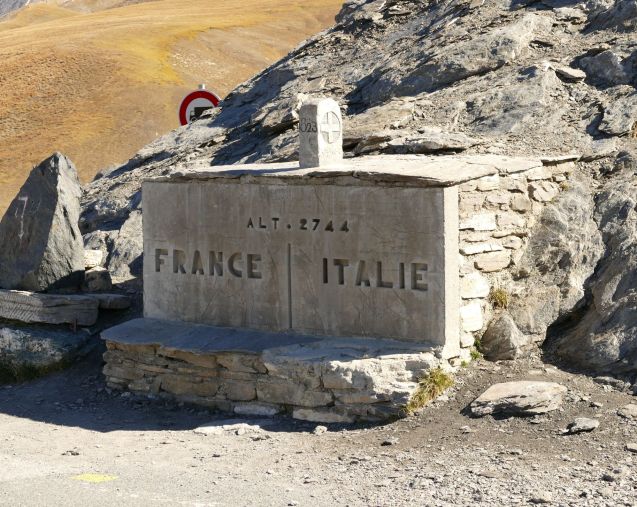 The first permanent winter closure this year is confirmed as the cross-border France-Italy Col Agnel, 2744m (9003ft). The summit is still open from the French side but the road is closed in both directions on the Italy side reports @TRAFSud. Expected to reopen on 26 May 2016. Find Agnel on PassFinder, or more information on high mountain roads that stay open through the winter. Photo @DriveEurope

roundup: IRELAND. Just 40% of drink driving cases brought before the district courts result in a conviction, compared to 97% in England and Wales, reports RTE. The conviction rate varies between 29% in County Kerry and 68% in County Offaly. One solicitor likens a drink driving prosecution to a hurdle race where if any of the hurdles are hit then the case will collapse. The government closed a loophole in the law last month which required breath test results to be presented in both Irish and English. One or the other is now sufficient. CHANNEL. Freight volume has grown by 6.4% in the past twelve months said Port of Dover today. Peak freight units reached 9300 per day in the period since the summer’s industrial action compared to 9200 last year, and all that with only eleven vessels operating compared to thirteen in 2014. Chief exec Tim Waggott described the results as ‘phenomenal’, and took the opportunity to press the case for the so-called Lower Thames Crossing as daily demand is expected to reach up to 16,000 units per day in the next decade. Meanwhile, DFDS confirms it will operate a third ship on the Dover-Calais route from January 2016 boosting sailings by ten to 54 each day. Fares are available to book now from £39 each way. MOUNTAINS. From being billed as the most exciting non-event of the year – and bitching about ‘ignored climbs’ – the announcement of the 2016 Tour de France route seems to have stunned the cycling community into silence. Full details are not available yet. All we know is the tour follows the same basic trajectory as last year, starting in western France before heading to the Pyrenees then Mont Ventoux, the Alps and Switzerland. The best-named climb so far is Col de Pisseloup in the Jura, ‘the pass of the peeing wolf’, or ‘wolf-pee pass’ according to @CyclingAlps. More anon.