New official figures shed more light on how the strike and migrant disruption affected freight crossing to the Continent this summer. Meanwhile, the number of UK-registered trucks continues to fall.

Meanwhile, the Czech Republic is in trouble with the EU over ‘Driving Licence Tourism’ – and other countries for not connecting to the EU driving licence network – while Poland still lacks an electronic register of haulier infringements, and has not implemented EU laws on ‘interoperable’ truck tolls.

Also, a heads up on ‘Snowmageddon’ and a roundup of closed mountain passes. DFDS told to warn passengers about ‘imminent impacts’. Warnings over new speed camera smartphone app. Serbia sets 2017 deadline for completion of in-build motorways.

TRUCKS AVOID FRANCE OVER THE SUMMER 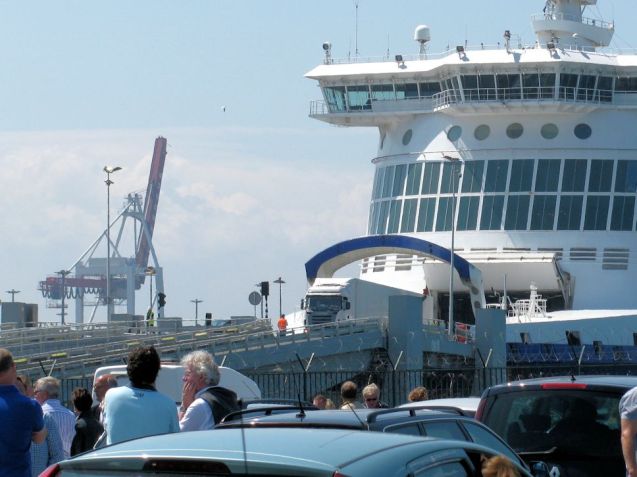 The number of trucks crossing from the UK to the Continent fell by 3% between July and September this year (Q3) compared to the same period in 2014 – but it was still the second best Q3 result since records began more than thirty years ago.

More than 718,000 HGVs made the crossing in the three months – split 525,000 trucks: 193,000 unaccompanied trailers – according to new figures from the UK Department for Transport.

However, the number of trucks disembarking in France fell by 8%, the first fall since 2011.

‘There is currently insufficient information to assess whether this decrease is a new trend or a fluctuation associated with disruptions at Calais and the closure of MyFerryLink,’ says the DfT.

‘These increases may represent powered vehicles rerouting from Dover Strait sailings to other ports,’ says the DfT.

Meanwhile, in the year to September the overall number of HGVs travelling from the UK to the Continent grew by 6%.

Volume is now 4% higher than the pre-recession peak in 2007 and has grown consistently since June 2012.

The bulk of the increase crossed via the Dover Strait – 111,000 of the extra 173,000 taking the total to just over 3 million. The Dover Strait takes two thirds of all HGVs with the remainder split 4% English Channel and 28% North Sea.

However, 94% of unaccompanied trailers go via the North Sea and 89% of trucks cross the Dover Strait.

The number of foreign-registered HGVs grew by 8% to just under 2 million in the twelve months to September continuing an upward trend seen since 2009. Foreign trucks have grown fourfold in the past 20 years.

Next biggest is Romania on 9% followed by Hungary and the Czech Republic on 4% each and Bulgaria at 3%.

Also: as the summer results from Port of Dover showed freight booming while tourist numbers fell, Q3 results from Dover-Calais/Dunkirk operator DFDS today say freight volumes increased by 4.7%, and passengers by 10.3%, even while one ship was laid up on the Calais route.

And: the Czech Republic is in trouble with the European Commission for failing to combat so-called ‘Driving Licence Tourism’. In the period 2004-2011 licences were apparently issued to people living outside the country. In addition, the Czech Republic has not connected to RESPER, the EU driving licence network, and neither have Estonia, Italy, Portugal or Slovenia. Meanwhile, Poland is being taken to task for not establishing a national electronic register of road transport undertakings – on authorisations, and possible infringements by hauliers – and thus not connecting with similar system in other EU states. Poland has not implemented EU legislation on ‘interoperability’ of electronic truck tolls either. The actions were all notified in the Commission’s November 2015 infringements package.

France’s Col de l’Iseran closed for the winter today ahead of the expected ‘Snowmageddon‘, as has Switzerland’s awesome Grimsel Pass (until 19 June 2016 according to TCS). Austria’s Silvretta Hochalpenstrasse has also pulled the shutters down since our last roundup, but overall the amazing thing is that most high roads are still open*. That might change from tonight – the latest forecast shows up to two meters of snow falling in the Alps until Monday (23 November), especially in the west, and up to 70cm in the Pyrenees and northern Spain. Snow will settle above 2000m to start with then work its way down to 700m. Overnight Saturday will see 5cm on the A43 near Chambery in south east France and 15cm between Annecy and Grenoble says @AutorouteInfo. Germany and Luxembourg are also likely to see at least a smattering. Photo @ASFINAG. *Petit St-Bernard, Galibier, Madeleine, Mont-Cenis, Croix de Fer, Glandon and Cormet de Roselend, all in France, all closed today for winter too.

roundup: CROSSING THE CHANNEL. Injuries sustained after an ‘unintentional and unexplained’ loss of steering control on DFDS Dover Seaways – which saw it hit the breakwater while departing last November – could have been prevented if ship staff had issued a ‘timely warning’ says the report by the Marine Accident Investigation Branch. Minor injuries were reported by ‘several’ passengers and crew. MAIB recommends DFDS improve crews’ response to emergency situations, including ship systems failure, and prioritise warnings when impact is imminent. SPEED CAMERAS. Intelligent Transport Systems consortium ERTICO highlights a new, free Android smartphone app from TomTom which marks positions of fixed and mobile speed cameras in real time. The locations are updated by 4.6m users says the company. However, as pointed out by @DriveGuideGuru, such applications are illegal in many countries and subject to heavy fines, notably France. SERBIA. All motorways currently in-build, including between Belgrade and Prishtina (Kosovo) and Nis and the Bulgarian border at Dimitrovgrad/Kalotina, will be completed by April 2017 reports InSerbia.info. ‘By the beginning of April 2017, we will complete all motorways that we have started building. We have been building them for decades and talking about this for 70 years. It will dramatically increase the number of people travelling in our country and lead to economic growth,’ said Serbian PM Aleksandar Vucic.