Evidence mounts that the on-going Calais migrant crisis and strikes unsurprisingly put customers off the quickest and cheapest ferry route to the Continent last year. Will they come back?

Also, a Retromobile reminder about an historic road trip photo. And, fines for in-car smoking in Italy, and bent number plates in Spain. Fuel prices up in Luxembourg.

WILL CUSTOMERS COME BACK TO CALAIS?

Both trucks and cars both avoided the French port last year.

Brittany Ferries has been one of the big winners from Calais’ troubles in the summer. Photo @DriveEurope

The total number of passengers carried between Dover, Calais and Dunkirk topped 13 million last year but that was still a 2.2 percent fall on 2014.

Overall however, the number of people crossing between the UK and the Continent fell by only 1 percent – to 18.13 million – as passengers used other routes.

In a statement, Bill Gibbons, director of ferry industry association Discover Ferries said, ‘Despite the summer issues at Calais last year, P&O Ferries and DFDS adapted their capacity and sailings to great effect, and other continental ferry operators took up any car customers who were able to re-route.’

The western channel routes to France saw passengers increase by 3.4% to 2.94 million while the North Sea ferry routes stayed flat at 2.18 million.

As previously reported, tourist numbers through Dover definitely dipped over the summer, and there was some evidence to say truck traffic did too.

Whether they have recovered since is hard to tell since P&O and DFDS’s healthy 2015 results were bolstered by the withdrawal of MyFerryLink.

Clearly however, Dover-Calais operators have their work cut out to persuade customers the route is safe, especially after the recent strike action and a migrant occupation of a ferry in Calais port.

Since then it has been relatively quiet. There was a minor scuffle on Sunday afternoon. An attempt to slow trucks on the Calais N216 port road was quickly rebuffed by police said pro-migrant group @CalaisSolidarity.

Work is on-going to clear a 100m ‘no-man’s land’ between the port road and The Jungle migrant camp.

Meanwhile, Eurotunnel – whose site in France has been fully secure for some months now, though the A16 autoroute is inevitably still vulnerable – has appointed a former gendarme and solider as its new security chief.

Update: January bookings were up 23% year-on-year says comparison site Direct Ferries according to Travel Weekly. Routes from the UK to France, Ireland and Spain all saw significant increases – particularly France for the Euro 2016 football tournament in June and July. 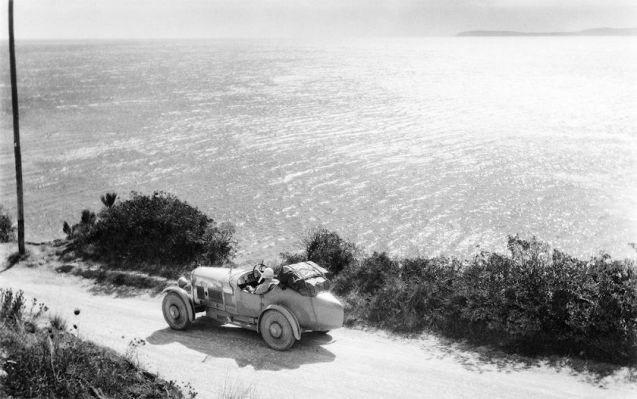 The Retromobile show, which kicks off the vintage car season in Paris today, features an exhibition by photographer Jacques Henri Lartigue. His evocative ‘Mediterranean Sea, 12 September 1927’, above, certainly set off our fevered imaginations, see ‘Amilcar and Bugatti. Tied in a fatal embrace.’

roundup: ITALY. Drivers who smoke in cars with children or pregnant women present face a €650 fine reports The Local Italy. It’s one of a raft of new anti-smoking laws which take effect today and include a €300 fine for throwing cigarette butts on the floor (or, presumably, out of the car window). SPAIN. A young mother was ‘absolutely livid’ when police fined her €200 for having an allegedly illegible number plate reports The Olive Press. The plate itself was only ‘slightly bent’ says the paper but experts from the N332 English language driving in Spain website say registrations must be in ‘perfect condition’. LUXEMBOURG. After reporting yesterday on declining ‘fuel tourism’ in the Grand Duchy, today a rise in the cost of fuel. The nationally regulated price of unleaded95 is up to €1.061 per litre says Wort.lu with unleaded98 at €1.116. Diesel now at €0.874 narrows the gap to neighbouring Germany even more where it sells for an average €0.969 according to Fuel Prices Europe.