Updated: after widespread calls to postpone the upcoming minimum wage rule for international commercial drivers in France, the European Commission opens cases against France and Germany.

Widespread calls for new law to be delayed. See below for update. 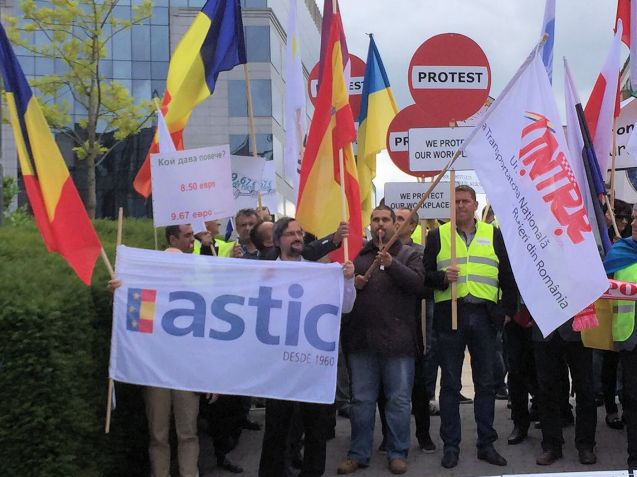 Just over two weeks before it takes effect, there is still much confusion over the new minimum wage law for truck drivers in France.

It is not clear if the law applies just to foreign drivers on internal ‘cabotage’ jobs, those making deliveries or, though this is unlikely, all truck drivers passing through France (updated, see below).

Until the situation is clarified, the IRU International Road Transport Union, the UK’s FTA Freight Transport Association and Belgium’s FEBETRA transport federation have all called for the implementation to be delayed.

The IRU’s Michael Nielsen says, ‘It is completely unacceptable to impose these obligations, without first thoroughly informing those who will be responsible for complying with them, especially noting that hauliers face a € 500,000 fine if found guilty of not complying with the rules.’

Chris Yarsley, FTA’s EU Affairs Manager, said: ‘It is unacceptable that the French government has not given industry full information and guidance on these new measures, only days before they come into force. The sector must be given more time to adapt business practices before any enforcement takes place.’

FEBETRA echoes these statements and also wonders whether ‘all the red tape’ should apply to its members since the Belgian minimum wage is higher than the one in France.

The ‘Loi Macron Law’ which comes into effect on 1 July 2016 means operators have to register, appoint a representative in France, and fill out lengthy official paperwork to show the driver is paid at least the French minimum wage (€9.67 per hour or €1457.52 per month).

Three versions of the five page declaration to be filled in by the employer – Declaration Prealable de Detachment – were posted by the French employment ministry last week, relating to temporary work, ‘intragroup mobility’ and other. The forms do at least contain English translations.

Update 16 June: the European Commission has opened an ‘infringement procedure’ against France (and Germany) over their minimum wage rules.

‘In both cases,’ it says in a statement, ‘the Commission considers that the application of the minimum wage to certain international transport operations having only a marginal link to the territory of the host Member State cannot be justified, as it creates disproportionate administrative barriers, which prevent the internal market from functioning properly. The Commission considers that more proportionate measures should be taken to safeguard the social protection of workers and to ensure undistorted competition, whilst allowing for free movement of services and goods.’

Both countries have two months to respond. The French Minister for Transport said its new rules actually limit the administrative burden and will ensure existing regulations are complied with. The OTRE haulage union calls the EU probe ‘scandalous’ and shocking’ saying the situation in the French haulage market shows existing rules are not respected. However, rival union FNTR said France should have waited for the outcome of the German minimum wage case.

The Commission also clarified that the French minimum wage rule ‘applies to cabotage and all international transport operations (transit excluded).’

The Commission has also launched a public consultation on its upcoming ‘Road Initiatives’, asking respondents about problems in the road transport sector, and the impacts of possible policy measures. It is open to everyone and closes on 15 September 2016.

Transalpina: Romania’s second blue chip mountain road – after Transfagarasan – opened for the summer last Friday (10 June) according to @RomaniaTourism. D67C Transalpina 2145m runs parallel to its more famous neighbour, 70 miles to the west. EVO magazine’s Henry Catchpole drove both roads in a Jaguar F-TYPE. Meanwhile, Transfagarasan currently stars in Ford’s Great European Driving Road series with Steve Sutcliffe. It’s not clear when Transfagarasan will open this year. It was closed when we were there in June. Last year it opened on 1 July.

roundup: P&O’s freight business is booming on the English Channel according to InvestDover – the Dover-Calais operator has recorded 13 straight months of more than 100,000 trucks per month breaking the previous record of seven straight months in 2012… classic car umbrella organisation FIVA Fédération Internationale des Véhicules Anciens has persuaded cultural heritage watchdog UNESCO to back select events reports Classic Cars for Sale. It is hoped that UNESCO endorsement will help persuade major cities not to ban historic vehicles such as Paris is intending to do from 1 July… Drivers who exceed the speed limit by 30kmh should be fined €1000 says Lower Saxony Interior minister Boris Pistorius. The left-leaning politician could also propose fines based on income at a meeting German’s interior ministers tomorrow – though he accepts that neither plan is likely to be accepted according to SZ Suddeutsche Zeitung. Germany’s traffic fines are notably low compared to most other EU countries. Meanwhile, a Swiss driver was fined €15 for driving at 15kmh through the centre of Lahr in Baden-Wurttemberg a reports The Local Switzerland. Vehicles are limited to walking pace, or 7kmh, in the town. Also, a light aircraft pilot was forced to make an emergency landing on an autobahn yesterday afternoon after the plane developed engine trouble. He was also forced to land against the flow of traffic, near Gutersloh, on the A2 between Dortmund and Hanover. Aside from clipping a truck as it came to a halt there was no damage, or injuries… Switzerland‘s government has confirmed drivers are not allowed to take Swiss-registered hire cars into EU countries. The new EU rule has been causing some consternation and confusion, especially in Geneva airport which is half in neighbouring France. The new rule is apparently designed to prevent stolen cars being imported into the EU. Public broadcaster Swiss.info said yesterday that while a better solution is worked out, hire companies have been allowed to buy EU-registered vehicles for use outside Switzerland.