Another ‘Europe’s most dangerous roads’ article, this time relying on the facts.

Ignore mountain passes – instead look to Europe’s most dangerous country.

Travel websites are most amusing with their obligatory, clickbait ‘most dangerous roads in Europe’ articles.

Rarely are they the result of carefully analysing accident rates.

Mostly it’s about the size of any sheer drops, and whether the roads have barriers or not. All set off with a spectacular photo (mainly of Stelvio).

In the real world the most dangerous roads are much less glamorous, most likely single lane routes between large towns or cities where the need to overtake has habitually tragic consequences.

Bulgaria’s most notorious stretch according to the parliament’s transport committee this week – via Sofia Globe – is the windy, coastal E87 between the Black Sea cities of Bourgas and Varna.

Since the beginning of 2013 there have been 864 accidents on this road resulting in 22 deaths – nine of them last year alone – and 198 injuries.

Next up is E85 Byala-Rousse (Ruse/Russe), up towards the Danube and Romanian border between Sofia and Bucharest.

We can’t speak for Burgas-Varna but we have driven E85.

Ostensibly there’s nothing particularly remarkable about it. However it is dead straight in many places, a well-known hazard.

Rolling gently past vast cornfields and little else there is a large temptation to speed, as we found out to our cost. 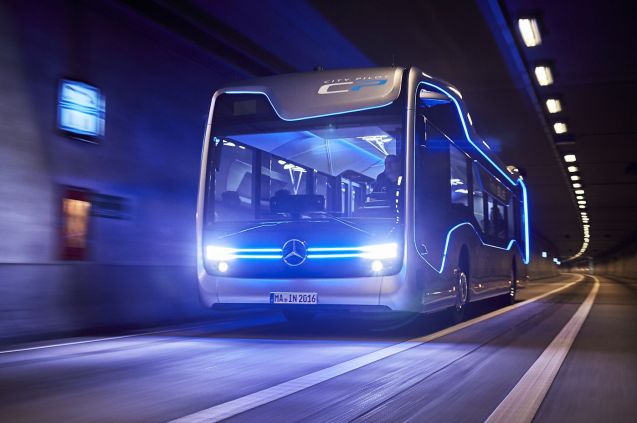 Mercedes-Benz has allowed the first glimpse of its new semi-autonomous bus prototype, the Future Bus with City Pilot. It uses ten cameras, two radar systems and traffic light phasing – based on the Highway Pilot system already seen on Mercedes trucks – to navigate routes, stopping automatically with ‘centimetric precision’. The firm says fixed bus routes are the ideal environment to develop self-driving technology. The vehicle has already been tested on public roads between Haarlem and Schiphol airport reports Dutch News today, and could be seen in service by 2020. Meanwhile, the German transport ministry has published draft legislation proposing a mandatory ‘black box’ on board autonomous vehicles reports Reuters, via Tech Crunch, to provide data after an accident and help apportion liability.

roundup: frustrated drivers staged a go-slow protest at the weekend over a less than expected cut to the Algarve’s east-west A22 Via do Infante motorway. The government had hinted at a 50 percent cut but announced a 15 percent reduction instead reports The Portugal News. As well as fuel, road tolls are very expensive in Portugal. Our 765km north-south drive last year cost €95 – 12c per km compared to around 7c in France. Meanwhile the traditional August exemption on road toll’s on Lisbon’s 25 April Bridge has been called off again this year – it was cancelled by the EU’s economic ‘troika’ in 2011 and is yet to return. However, the bridge to the west of the city centre costs just €1.45 each way for cars compared to €2.70 on the 17.2km Vasco da Gama Bridge in the west (see official info on Lisbon bridge tolls). Finally, Portuguese traffic police have lead their colleagues across Europe in warning drivers not to play Pokemon Go behind the wheel.