After last week we hesitate to call panic stations, but – while they might not be record breaking – the roads will be very busy this weekend. The good news is that the season is almost over.

Extra busy roads this weekend again, but season nearly over.

Traffic starts early on Black Saturday and can last until late.

After last week’s damp squib, drivers could be forgiven for thinking the hype over Black Saturdays was overdone.

Make no mistake however – 688km of jams is still an exceptional level of traffic in France, albeit substantially down on the record 994km set in 2014.

Bear in mind too that the second summer Black Saturday is traditionally the busier. And whereas last week’s return traffic was only ‘red’ it is ‘black’ this weekend – especially from the south east coast towards Paris.

Anyone driving on the major routes this weekend, south or north, should be ready for major delays.

Having said that, the pattern so far this year – and last – suggests drivers are avoiding the worst days.

The misery has been spread over the long weekend making for busy Mondays the past couple of weeks (though Sundays have been pretty quiet).

Meanwhile, there is only a narrow black band at the Mont Blanc Tunnel from France to Italy, early to mid-afternoon Saturday, but traffic is starting to build in the other direction, to a peak in late August.

The situation in France might be uncertain but Italy Is likely to deliver a classic Black Saturday this weekend, its sole super-busy day of the year.

The three roads to watch are the A1 Milan-Bologna, the A14 Bologna-Rimini and – particularly – the A4 Venice-Trieste, plus the A22 Brennero Innsbruck-Verona in both directions and the A10 and A12 either side of Genoa.

Like in France, the action in Italy starts early but goes on much later.

It will be another bad weekend on German roads too, but the good news is that it is the last one of the summer.

In theory anyway, from next weekend the roads should start to markedly improve. But beware, last year German holiday traffic also dragged on for longer than expected.

Peak traffic in Austria was last weekend – and was also much quieter than expected – but there are still another couple of busy ones ahead before the end of the season.

Traffic will be heaviest cross-border with Germany and Slovenia as drivers head home.

As ever, delays at the Switzerland’s Gotthard Tunnel will be hours long in both directions Friday to Monday.

Unlike most other European countries, holiday queues are set to continue for a fair few weeks yet…

Information: keep abreast of the latest situation in France on 107.7fm which has regular traffic news roundups in English, or see real time info at the Bison Fute website (or its new app). Invaluable on the major roads in the south is Vinci Autoroutes’ delay graphic, tweeted hourly on Black Saturday. See also @SANEF_1077 for the situation in the north and west. @DriveEurope also updates traffic info every 90 minutes from 05:00, plus breaking news. Also see the latest FCO travel advice @BritishinFrance. Trucks are banned from French roads on Saturday (from 07:00-19:00) – as is ‘collective transport of children’ in vehicles with 9+ seats. See more truck bans at Trafficban.com.

Catch up with what happened on Europe’s roads last weekend plus likely hotspots in France, and elsewhere in Europe. 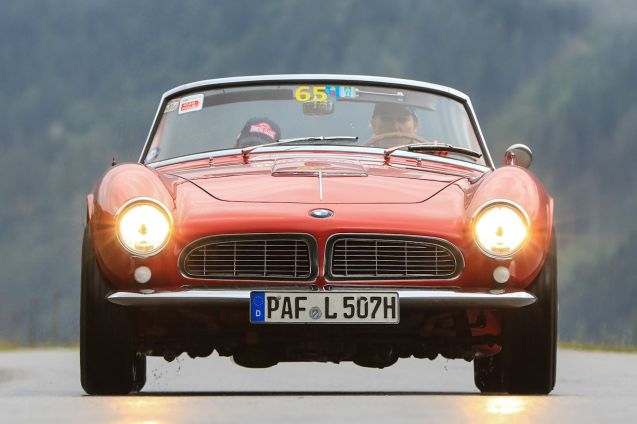 What with everything going on recently, last week’s Ennstal Classic seems to have slipped through the net. The best-of-the-best-of-the-best classic car rally was run, as ever, on the roads around Grobming and Schladming in central Austria. Most of the 30 stages are secret, and take in the narrowest, most remote roads, but headline passes this year included Stoderzinken, Nockalm and Tauplitzalm. Priceless participants included a 1962 Ferrari 250 GTO, Mark Webber in a 1960 Porsche RS 60 Spyder and, our favourite, this 1957 BMW 507. See more photos at Ennstal-Classic.at, or find the mountain roads at PassFinder. Photo Martin Huber for Ennstal Classic.

roundup: from rumours at the weekend that special police units had been moved to Channel ports in France, to yesterday’s – apparently – live exercise on board a Brittany Ferries boat, now confirmation overnight that armed ‘sea marshals’ are about to be deployed on board cross-Channel ferries. ‘A permanent unit has been deployed for passenger ferries since August 1,’ Lieutenant Pierre-Joachim Antona told AFP. ‘The marine gendarmes will carry out patrols, which will be random but regular, with the aim of securing these vessels against the terrorist threat’. He says the armed patrols would be similar to those in train stations. France and the UK are apparently in talks about expanding the patrols’ beyond French territorial waters, in which case there could be a permanent security presence on board… reports that Jenson Button was stopped for speeding in Monaco are unfounded says @McLarenF1. ‘Monaco police do random checks,’ tweeted the Formula One team. ‘JB showed his licence & that was the end of it.’ The Daily Mirror printed pictures of Button at the wheel of a black Mercedes C63 estate ‘looking stern’. You wonder why McLaren would bother to rebut it – Button’s £500 fine for driving at 144mph near Montpellier in a BMW 330d in 2000 – worth just £780 now according to This Is Money – was widely regarded as a boon to the then fledgling driver’s career. Were he to be caught at that speed these days his licence and car would be taken away and the on-the-spot €1500 fine would be a deposit pending a court appearance… public consultation on Germany’s new 2030 infrastructure plan has added €5.1 billion to the total bill, mainly for rail, transport minister Alexander Dobrindt announced today. Spending for the next fifteen years now comes to €269.6 billion on 1000 projects – 49.3 percent of which will go to roads (compared to 41.6 percent to rail), split 69:31 maintenance: new build, on the principle ‘preservation before construction’; 75:25 goes to national: local projects. Around 2000km of bottlenecks will be eliminated. The plan goes before Cabinet in August. See more at BVWP2030.de. Meanwhile in Spain, roads spending has dropped to the lowest level in three decades reports El Pais as rail spending is preserved. Road funding fell to 0.45 percent of GDP in 2013 and further since then. Road building got 85 percent less cash last year than in 2008 while maintenance was down 59 percent. Another €600 million was cut from the €2.1 billion budget in April. The money is taken from roads to protect the rail budget says the paper quoting an economics professor saying, ‘It is powerfully striking how they’ve tried to protect the railroad system from the cuts.’